The Winner Effect: The Neuroscience of Success and Failure

Written by jgkmckeon on July 24, 2013. Posted in Seminars 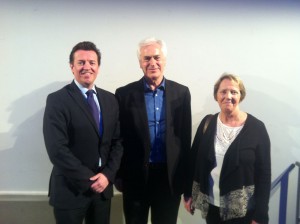 Trinity College’s very own Prof Robertson was on the John Murray show yesterday on RTE radio one speaking about how the effects of power can influence brain chemistry and behaviour.

The context was the recent ‘Anglo tapes’!

As we prepare for our next Lunch and learn on Friday 12th July 2013 I wanted to take the opportunity to recap on the excellent lunch and learn that Prof Robertson gave back on March 20th of this year.

As you may well know Professor Ian Robertson is Professor of Psychology at Trinity College Dublin and was the founding Director of Trinity College Institute of Neuroscience. He is a member of the Royal Irish Academy.

Ian Robertson is also author of “The Winner Effect: The Neuroscience of Success and Failure” so you can see why he was asked by RTE to comment on the culture issues we have recently heard in the banking world!

Ian gave a wonderful talk to a packed audience in the Science gallery about how to leverage the science of success to get more success with particular reference to brain chemistry.

The content, strategies and tactics of the talk were all extremely relevant to entrepreneurship and new enterprise growth. Wearing a red tie at business meetings and the mystery of the cichlid fish were favourites of mine. Read his book to find out more!

In his key note address Prof Robertson asked questions like; What makes a winner? Why do some succeed in business, and others fail? And why do a few individuals end up supremely powerful, while many remain powerless?

Ian explained that the ‘winner effect’ is a term used in biology to describe how an animal that has won a few fights against weak opponents is much more likely to win later bouts against stronger contenders.

Success changes the chemistry of the brain, making you more focused, smarter, more confident and more aggressive. The effect is as strong as any drug. And the more you win, the more you will go on to win. But the downside is that winning can become physically addictive.

By understanding what the mental and physical changes are that take place in the brain of a ‘winner’, how they happen, and why they affect some people more than others, he answered the question of why some people attain and then handle success better than others.

With particular relevance to early stage business he also explained what makes a winner – or a loser – and how we can use the answers to these questions to understand better the behaviour of our business colleagues and employees.

This coming Friday 12th July 2013the Trinity Enterprise Network will be hosting Philip McKernan for a Lunch and Learn at The Tower, Trinity Technology & Enterprise Campus – 12.30 – 2.00 pm. Phillip will be giving his talk on The Authenticity Code

Trackback from your site.