The symposium, entitled ‘Medical Research at the Cutting Edge’ jointly organised with the Weizmann Institute of Science.

James Watson won the Nobel Prize (Physiology or Medicine) in 1962 for his part in discovering the double-helix structure of DNA.

The five Nobel Laureates spoke about their research in the context of the improvement of human health and the development of new medical advances.

Also speaking at the symposium was Marc Feldmann, the 2003 winner of the Albert Lasker Award for Clinical Medical Research and 2014 winner of the Gairdner Prize, for the discovery of anti-TNF therapy for rheumatoid arthritis.

The symposium  started on the evening of Sunday, July 27th, with an opening address given by the president of the Royal Irish Academy, Professor Mary Daly. There was an official signing of a Memorandum of Understanding about the planned cooperation of Trinity College Dublin and the Weizmann Institute of Science.

The symposium was the joint initiative of Professor of Biochemistry at Trinity and Academic Director of TBSI, Luke O’Neill, and Professor David Wallach of the Weizmann Institute of The symposium concluded with a special session on the commercialisation of breakthroughs in biomedicine research. Speakers included Mark Ferguson of Science Foundation Ireland and Director of Trinity Research and Innovation, Diarmuid O’Brien, who is responsible for commercialisation of intellectual properties at TBSI.  Mudi Sheves, the Weizmann Institute’s vice president for technology transfer, also spoke about the Institute’s highly successful technology transfer mechanism.

For the Full story:

Prominent speakers and recognized experts, including the federal Minister of the Environment, the Honourable Leona Aglukkaq, met in Toronto earlier this month for the Asthma Society of Canada’s 40th Anniversary Summit, For Life and Breath.

The event looked at the link between health and the environment, particularly respiratory health and air quality.

The summit audience heard from a variety of speakers on 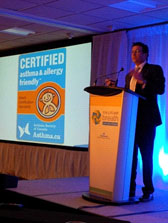 Additionally, the Asthma Society celebrated the contributions of three key individuals, whose work has dramatically helped improve the lives of Canadians with asthma and respiratory allergies.  These individuals received inaugural For Life and Breath Innovation Awards in the fields of:

Most speaker presentations will be made available in the near future.